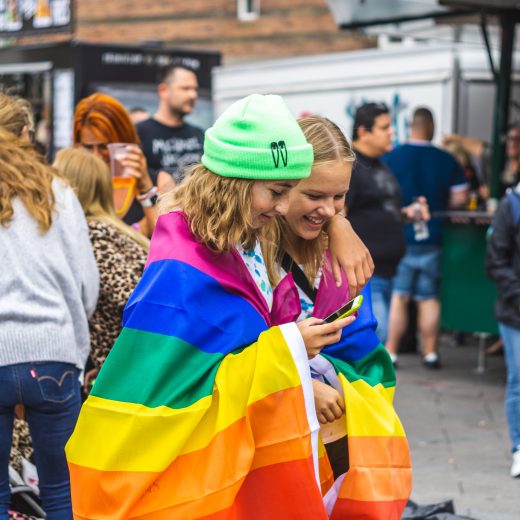 Reflections from a Child and Family Therapist…

It’s June and that means it’s time to celebrate Pride Month! Pride is a time to celebrate diverse genders and sexual orientations and commemorate the work people have done to ensure LGBTQ people can live openly and freely without discrimination. For parents, Pride Month is also a good time to reflect on personal biases, learn about LGBTQ history, expand awareness of gender and sexual orientation stereotypes and discrimination, and renew efforts to provide an open and accepting environment for adolescents who are exploring and developing their identity.

Before the West was colonized, indigenous cultures fully accepted gender and sexual diversity. Same-sex relationships existed in every culture, and people with a gender identity different than the one assigned to them at birth lived freely around the world. When Europeans conquered the New World, they were fearful of others’ differences, and they punished and sometimes killed individuals based on sexual orientation or gender identity. Homophobia and transphobia seeped into many institutions including the medical establishment.

Movements to re-instate and protect LGBTQ human rights began in the 1870s, and continue to this day. The first Pride celebration occurred in 1970, one year after The Stonewall Riots in New York City, in which the gay community stood up for their right to gather together. Pride celebrations have continued every year since then, despite hate crimes and continued prejudice and discrimination.

Have you noticed how perceptive adolescents can be? It may seem they are not listening, but they quietly pick up on subtle and not-so-subtle messages from parents, teachers, and other adults which reveal biases, hesitancies, and misgivings. When a teen starts to question their sexual orientation or gender identity, such messages may have a big impact on their willingness to openly talk about their concerns. They may feel like their sexual orientation or gender identity won’t be accepted, and consequently they may feel very alone.

Teens also need a safe community of peers whom they can confide in. Teens may witness bullying of LGBTQ individuals at their own school or learn from social media that LGBTQ violence is a serious and prevalent concern worldwide. This may affect their ability to talk comfortably with their peers about their identity, or be accepting of themselves. On top of other strong emotions teens experience involving grades, siblings, peers, etc., these bottled up feelings may have a big impact on their mental health. LGBTQ teens are at much higher risk of depression, suicide, and self-harm than their heterosexual, cisgender peers. Access to compassionate, sexual and gender-affirming health care is essential to helping LGBTQ teens cope, grow, and thrive.

Parents want to support their children the best way they can. If you don’t know much about gender diversity or different sexual orientation, if you have a child whose sexual orientation differs from your own, or if your child is questioning their gender assigned at birth, you may not know where to start. Information provided in the media may be confusing or feel incomplete. If this is you, know that you are not alone.

Luckily there are many free, accessible resources available for parents to learn more about gender diversity and sexual orientation. You might begin by familiarizing yourself with LGBTQ terms and definitions. You might also want to read up on how LGBTQ teens are at higher risk of mental health concerns and what you can do to protect your teen’s mental health. If you feel your teen needs resources of their own, The Trevor Project offers information and life-saving support to teens with gender identity and sexual orientation concerns.

Coming out can be a difficult and scary process for many children and teens. For gender non-conforming children and teens, coming out may involve seeking out acceptance and support from others about how they want to dress or express themselves. It may also involve asking others to address them using a different name or pronouns.

Recently, there’s been a growing awareness of how using someone’s correct personal pronouns shows respect. In the past 15-20 years, you may have started to see others share their pronouns during introductions or in online meetings. When a child or teen tells us what pronouns they use and we do not use their pronouns correctly, this can be quite harmful. Think about how offended you would be if someone only called you by a nickname you disliked against your will. Learning to use others’ pronouns correctly takes practice and intention, but goes a long way to creating a supportive, nurturing relationship.

At the end of the day, the most important thing parents can do for their adolescents who are developing their identity is to remain mindful and meet their teens’ curiosity and questioning with openness, kindness, and love. During this Pride Month, consider making a commitment to expanding your awareness or understanding of LGBTQ concerns.

Intuition Wellness Center appreciates and honors the diversity and uniqueness of all human beings and believes in equitable care by and for all. We believe that all people deserve high-quality, compassionate health care  – no matter who they are. At Intuition Wellness Center, we specialize in health and wellness services for children, young adults, and their families. If you think you would like some extra support, we’re here for you.