Why You Should Talk to Your Children About Race… Yes, Even if You’re White

My kids had a day off of school last month in honor of Dr. Martin Luther King, Jr. It was a natural opportunity for us to talk about who Dr. King was and why his tireless activism was so important. One thing led to another and we were deep in conversation about motivations for racism. I doubted myself. I stumbled on my words. This isn’t the first time that I’ve talked to my children about race, but the older they get the more complex their questions become. I know that it’s part of my white privilege that I don’t think of my race all the time. I also know that talking about race just once a year or just a few times during Black History Month is not enough. We have to talk to our children about race and yes, even us white people.

Why you should talk to your children about race.

Well-meaning, but misinformed, many white parents hesitate to teach their children about racial constructs.  There seems to be a wish for a utopian “we’re-all-the-same” approach and by drawing attention to difference we worry that we will disrupt this. Many white parents worry that even saying something positive about race will highlight and create divisions. This assumes that children weren’t previously aware of difference, but this just isn’t what the research suggests. In fact, we’ve known for some time that children become aware of race around age 3 and some research suggests this happens even as early as infancy.

According to a 2007 study, nonwhite parents are about three times more likely to discuss race than white parents; 75 percent of white parents never or almost never talk to their children about race. In a study that asked white parents to address race with their children, some of the participants dropped out or were only willing to make positive general statements about equality, but not about race specifically. This isn’t enough. Research suggests that without specifically addressing race, children do not generalize these statements to race and, in fact, demonstrate racial bias from a very young age.

Bias is in all of us. 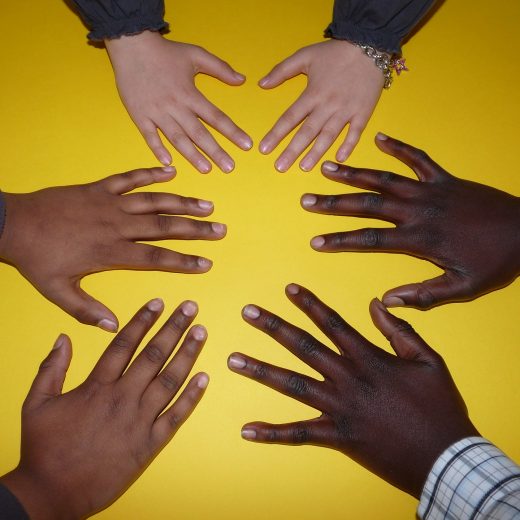 Bias exists for all of us. If we’re committed to eliminating it, we also must be open to examining our biases on a regular basis. We used to believe that bias was all socially constructed, but newer theories suggest that preferences for sameness may be more complicated and appear at a very young age. Without talking to our children about bias and specifically with regard to race, we limit their awareness and make them more susceptible to absorb bias. Normalizing this experience while encouraging inclusivity gives our children the information they need to develop self awareness and also recognize micro aggressions.

Interested in exploring your bias? Take a short test through Harvard’s Project Implicit.

Children are notorious for fearlessly demonstrating their curiosity. I have a friend who once told me that, while waiting in a grocery store checkout lane, her young white child stared and stared at a black cashier with very dark skin. My friend silently cringed inside thinking about what bold statement her child was about to make. Yet something important happened. She didn’t stop her, rush her, or shush her. Instead, she allowed her daughter to ask the question on her mind and taught her the lifelong lesson that discussion about differences is valued and welcome. Had my friend suggested it wasn’t a topic to be talked about, she would have reinforced bias and suggested that there was something wrong with discussion about race or even with talking to the black cashier.

Mistakes are bound to happen in these conversations. Many white parents want to wait to talk to their children until the just-right moment or until they have the perfect wording. But it never happens. Waiting for the “right” way to talk about race allows for avoidance. Many of us worry that we’ll offend someone. What if my child says something hurtful? What if I say something hurtful? What if I’m perceived as a bad person? As a racist? This is part of the baggage that we carry from our own histories of being shamed, shushed, and shut down in our curiosity. Our children don’t have that same baggage yet. But unless we choose to engage in open dialogue, our kids will follow in our footsteps.

By the way, it turned out that my friend’s child really just wanted to ask how the cashier kept his teeth so white. 🙂

White people often don’t realize that NOT talking about race is part of their privilege. Many people of color and other non-white groups think about their race a lot more often than white people. They don’t have a choice because it comes up often in their environment due to a multitude of microagressions and systemic issues that pervade even decades after the civil rights movement.

Teaching our children how to be allies, to question and evaluate their own and others’ biases, and to call out racism is teaching them to be change makers. They can’t do this without being informed and we, as parents, can be critical supporters in modeling what that looks like. It starts by creating a culture of open dialogue and learning.

Not sure where to start?

Become informed by going to events and reading. Black History Month is a good time to start, but certainly don’t let it end there. Many public libraries offer programming in celebration of Black History Month and your librarian can make recommendations about books appropriate to your child’s age. Try some of the resources below, too.

For those local to Tucson, Arizona, Pima County public libraries are hosting a number of events in February:

Children’s books and videos by black authors, about black figures or focused on black culture:

At Intuition Wellness Center, we specialize in health and wellness services for children, young adults, and their families. If you think you would like some extra support, call us. Call 520-333-3320 for a free phone consultation.